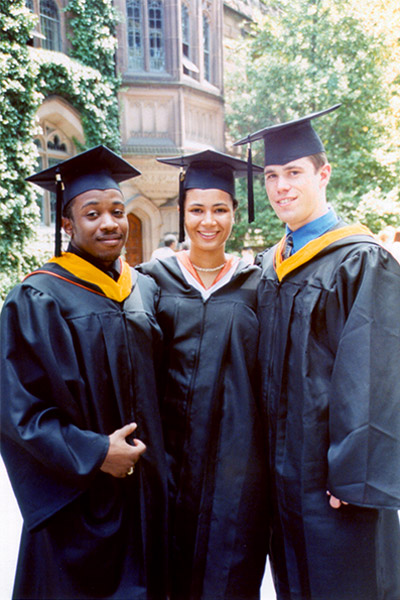 On August 31, 2001, the Class of â€™01 lost a beloved member of its family, Avery Kesley Waddell, to a tragic accident.Â  At Princeton he received his degree in Operations Research & Financial Engineering and upon graduation worked as an analyst for the Fixed Income Group of Goldman Sachs and Co. in New York.Â  During his years at Princeton, Avery not only devoted his time to his studies, but also served in the leadership of many extracurricular activities, including Public Safety Manager, Vice President for the National Society for Black Engineers, and President of the Black Menâ€™s Awareness Group.

Avery also had a lifelong love and passion for music.Â  Before attending Princeton, he had opened for headliners such as Coolio, the Wu Tang Clan, and various other artists.Â  He carried his love for music to his Princeton dorm room, where friends would often find him composing new rhymes or beats.Â  He even managed to convert his passion for music into his senior thesis entitled, “The Sound of Money”, which took a financial engineering approach to gain insights into the record industry.Â  His own personal music was featured on two compilation CDs, “Da Ambush” and “Pulse”.Â  The latter CD, which was sponsored by the Pennsylvania Coalition Against Rape (PCAR), was in conjunction with a benefit concert at which Avery performed in his hometown of Harrisburg, PA.

Those who knew him will always remember Averyâ€™s bright smile, joyous laughter, amazing wit, fierce determination, and of course, his Timberland boots.Â  He is sorely missed by his family and friends.